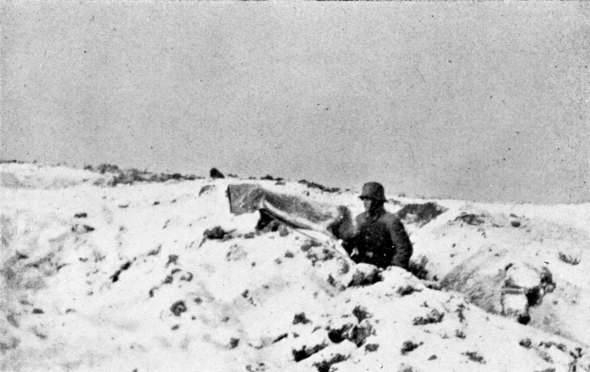 This image, which makes you cold just by looking at it, is perhaps more reminiscent of the Eastern Front in WW2, but in fact it was taken in early 1917. It shows a German machine-gun position in a forward trench close to the village of Le Transloy on the Somme front during the winter of 1916/17. This was the coldest winter of the war on the Western Front, when temperatures dropped to minus twenty on the Somme. This area of the battlefields is open and exposed, even in the summer, and one can only imagine what it must have been like to survive during that winter nearly a hundred years ago.

The photograph comes from the photo history of the 26th Division, a Wurttemberg division, who fought in Russia and on the Western Front.

Today is the 96th Anniversary of the Battle of Arras, the first British offensive against the Hindenburg Line and something of a forgotten battle. It was very much a British and Commonwealth battle, with Canadians attacking to the North at Vimy Ridge, New Zealand tunnellers working beneath Arras and Australians on the flank at Bullecourt. Amongst the British divisions were all three Scottish formations: 9th (Scottish), 15th (Scottish) and 51st (Highland), so like Loos in 1915 it was also something of a ‘Scottish battle’ too. Arras turned into a bloody struggle, despite early success on this day in 1917 but aside from the success of the Canadians at Vimy and the terrible loss of Australians at Bullecourt – often wrongly seen as separate battles by some – it is little remembered and aside from books like my Walking Arras, Jeremy Banning & Peter Barton’s Arras 1917 and Jon Nicholl’s Cheerful Sacrifice it has rarely attracted the attention of Great War historians in print. As we move towards the WW1 centenary, hopefully that will change.

This image comes from a special collection of Canadian images from the fighting at Arras that belonged to a CEF staff officer and shows Canadian troops on the slopes of Hill 145 looking down in the Douai Plain; it certainly emphasises how important a terrain feature was to both sides.

Trenches In The Sand: One End of the Western Front

The Western Front at its peak was over 450 miles long, stretching from the Belgian coast at Nieuport to the Swiss border near the village of Pfetterhouse. The terrain along that front varied widely from the flat plains of Flanders to the rolling downland of the Somme, through forests like the Argonne and into mountains when it reached the Vosges.

On the Belgian end of the front, at Nieuport, the trench system ran right up to the beach, with that end of the Western Front literally petering out in the sand. For most of the war it was held by the Belgian Army but in 1917 British troops took over the sector in the lead-up to what was eventually an abandoned plan to make seaborne landings further up the coast. However, in July 1917 the Germans went on the offensive here and attacked the forward positions held by British units around the town of Nieuport.

This photograph, from a German source, dates from that period and shows an overrun British trench following the fighting in July 1917. The bunker was in the extreme northern positions on the Western Front and directly overlooked the beach and indeed the sea; both of which are visible in the background on this image. It is probably not how most people think the Western Front came to an end on this Northern end of the battlefield!

The Belgian Army in some ways is often a forgotten force in the Great War. Their men fired some of the earliest shots when the Germans crossed the border during the Schlieffen Plan and by the end of 1914 they were holding the Yser Front from north of Ypres to the Belgian coast at Nieuport; positions largely along the Yser Canal. By 1918 more than 30,000 Belgian soldiers had died in the war.

This image from the winter of 1917 shows two Belgian soldiers equipped for the cold, dressed in their greatcoats. After 1914 much of the Belgian Army equipment was supplied by Britain and the Belgians began to wear a uniform that was a variation of the some of the British designs as all their factories had been overrun by the Germans. But their headgear was always distinctive, as seen here.

The Yser front north of Ypres is a forgotten sector of the Western Front. It linked the Ypres Salient with the Belgian coast and for most of its length the front lines straddled the Yser Canal; with the Belgian Army dug in on the west bank and the Germans on the opposite bank. Nearly 30,000 Belgian soldiers were killed on this front which remained pretty static for most of the Great War until the final offensives of 1918.

This photograph, from a series of stereocards, shows Belgian troops in a typical trench on the Yser front in early 1917. It is a fairly basic straight trench, not zig-zagged for extra protection, and with a basic duckboard floor. The trench is also more of a breastwork than a trench dug in the ground, as this pretty much reflected the flood conditions that prevailed on this part of the front where digging in on the surface was impossible. High sandbag walls protect the trench occupants, two of whom are seen here in typical Belgian uniforms of the period.

Today is Cambrai Day: the anniversary of the Battle of Cambrai in November 1917 when a force of more than 400 Mark IV Tanks broke the defences of the German Hindenburg Line and finally showed what tanks were capable of. Cambrai turned from a battle of great success to failure, but it heralded a new type of warfare and changed the nature of the battlefield forever.

This photograph was taken after the conclusion of the battle in December 1917 at the railway marshalling yard at Cambrai. When the battle had turned to disaster for the British, a large number of Mark IV Tanks were captured and taken away by the Germans for analysis and eventual incorporation into their own tank force. Many of these tanks were used against the British in the German Offensives of the Spring of 1918, and against the French near Reims.

At the time of Cambrai Britain’s tank force was known as the Tank Corps which later became the Royal Tank Regiment. On this Cambrai Day we recall their unofficial motto, inspired partially by the experience in 1917 and remember Tankies of all nations.

From Mud, Through Blood to the Green Fields Beyond.