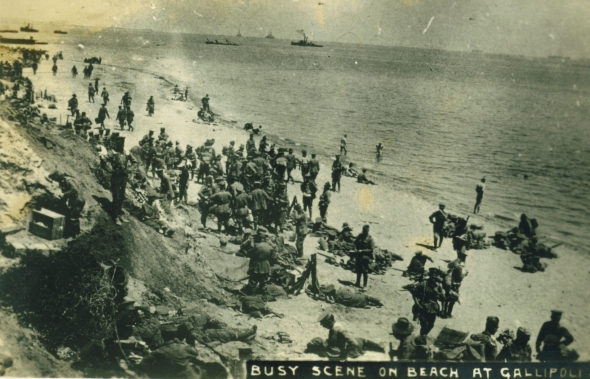 On this day 99 years ago the Gallipoli landings began at Cape Helles and what would later be described as ANZAC Cove. Across Australia and New Zealand today many families will be remembering, and there will be dawn services in Gallipoli itself and at Villers-Bretonneux in France. Thousands of ANZAC descendants will be there on this, ANZAC Day.

In Britain Gallipoli is not seen as significant compared to how it is viewed down under, and even less remembered in France, although more French troops fought in the campaign than Australians.

Gallipoli will always be personal to me as my paternal grandfather took part in the landings at W Beach – ‘Lancashire Landing‘ – two great uncles were in the campaign, one of them being killed at Krithia, and my maternal grandfather worked on the cemeteries there with the British Army in the 1920s.

While war poetry is not for everyone, this is what I shall be thinking of today, as well as the times I too have slept by that shore and walked those bluffs above the beaches.

The Last to Leave by Leon Gellert

This image is from a German photograph and shows British dead from the 62nd (West Riding) Division left behind in the German trenches after one of the failed attacks. These Yorkshire Territorial troops took heavy casualties in the fighting of both April and May 1917. Among those who fought at Bullecourt with the division was author Henry Williamson, who later wrote the classic Tarka The Otter.