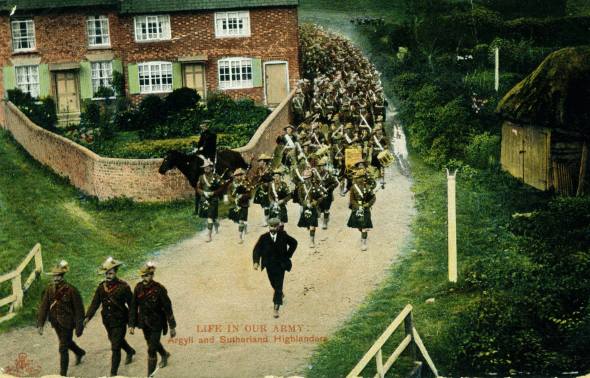 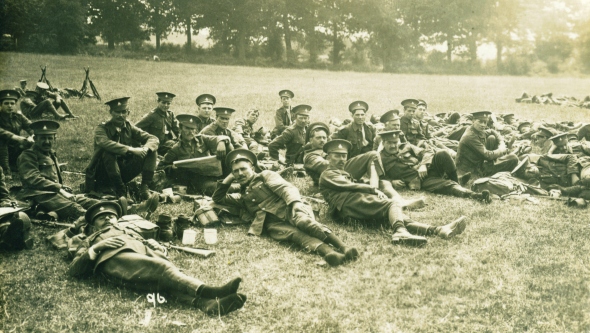 We end this month’s Winter War series with a photograph from Christmas Day 1914. It shows men of the 11th Battalion Royal Sussex Regiment (1st Southdowns Battalion) having Christmas Lunch in their wooden hut at Cooden Camp, just outside Bexhill-on-Sea. The lunch was paid for by the man who had raised the Southdowns, the county of Sussex’s equivalent of ‘Pals’ battalions, Lieutenant Colonel Claude Lowther MP. The men are still in their ‘Kitchener’s Blues‘ uniforms; enough khaki not having yet arrived to equip more than handful of recruits.

The 11th would last the longest of all the wartime raised battalions of the Royal Sussex Regiment. It’s war would take it finally to France in 1916, and then in almost every major engagement up to the end of the conflict on the Western Front and in late 1918 to Russia where it would stay well into 1919 fighting against the Bolsheviks.

For these Sussex worthies it was the first Christmas of a long war; how many of them in this photo would come home when the battalion was finally disbanded?

A week long Remembrance theme starts on Great War Photos today and will include over the period leading up to and including 11th November a whole host of posts, with some days having several posts; reaching a peak around 11am on the 11th November. On 8th November the site will also host some images relating to my new TV Series on Messines – WW1 Tunnels of Death.

We start with an image relating to an event which took place 94 years ago today; the last great battle of the First World War, the Battle of the Sambre. By November 1918 the old trench system on the Western Front had collapsed and it was now open warfare. The Germans resorted to using geographical features to defend and on 4th November 1918 it was the Sambre-Oise Canal. More men went into battle that day than on the First Day of the Somme in 1916 but it was a very different battle, with minimal losses and mostly success; but not without some casualties; among them the war poet, Wilfred Owen.

This image was owned by a Great War veteran I knew, Josh Grover MM. It shows Lock No 1 on the Sambre canal where the 2nd Battalion Royal Sussex Regiment crossed, supported by Royal Engineers. Two Victoria Crosses were awarded here, one to the commander of Josh’s battalion, Lieutenant Colonel Dudley Graham Johnson DSO. His citation reads,

“Lieutenant-Colonel Dudley Johnson D.S.O., M.C., South Wales Borderers, attached 2nd Battalion Royal Sussex, for most conspicuous bravery and leadership during the forcing of the Sambre Canal on November 4th, 1918. The 2nd Infantry Brigade, of which 2nd Battalion Royal Sussex formed part, was ordered to cross the lock south of Catellon. The position was strong and before the bridge could be thrown, a steep bank leading up to the lock and a waterway about 100 yards short of the canal had to be crossed. The assaulting platoons and bridging parties Royal Engineers, on their arrival at the waterway were thrown into confusion by a heavy barrage and machine gun fire and heavy casualties were caused. At this moment Lieutenant-Colonel Johnson arrived and realising the situation at once collected men to man the bridges and assist the Royal Engineers and personally led the assault. In spite of his efforts heavy fire again broke up the assaulting and bridging parties. Without any hesitation he again organised the platoons and bridging parties and led them at the lock, this time succeeding in effecting a crossing after which all went well. During all this time Lieutenant-Colonel Johnson was under heavy fire, which, though it nearly decimated the assaulting columns, left him untouched. His conduct was a fine example of great valour, coolness and intrepidity, which, added to his splendid leadership and offensive spirit that he had inspired in his Battalion, were entirely responsible for the successful crossing.”

The Sussex crossed here successfully and Josh, a Lewis Gunner, survived when hit by machine-gun fire from the building shown in this photo; the bullets struck the machine-gun and not him. Josh lived a long life, and regularly returned to the battlefields in the 1980s; a memorial to him exists on the site where this action took place in 1918.

Tomorrow is the anniversary of the Battle of the Somme, but today is another anniversary – of a forgotten battle from the same year.

On 30th June 1916 the men of the 11th, 12th and 13th Battalions Royal Sussex Regiment (South Downs) fought a two and a half hour battle in the German lines close to the ‘Boar’s Head’ at Richebourg in Northern France. More than 360 South Downs men were killed and 1,100 wounded or missing. Veterans called it ‘The Day Sussex Died’.

The South Downs were unusual in Sussex as they were the nearest the county had to ‘Pals’ battalions; this photo shows men of the 1st South Downs at Cooden Camp near Bexhill on Sea, during their training there in September 1914. At this stage there were very few uniforms and most men slept under canvas. Morale in this unit was very high; something that continued well after the war as the Old Comrades Association continued to meet until 1979 and the last South Downer died in the early 1990s.

You can read more about the battle here:

One of the most famous musical hall performers of the Great War period was Basil Hallam Radford. Otherwise known as ‘Gilbert The Filbert – The Nut with a K’ or the ‘KNut’. This humour seems very dated now but it was a phrase in common usage by that generation and appears on captions and sign-boards in many WW1 images. The ‘K’ was also often linked to Lord Kitchener during the war and in photos of Kitchener’s Army men they often refer to themselves as ‘KNuts’.

These Somme KNuts are from the 2nd Battalion Royal Sussex Regiment. They arrived on the Somme in July 1916 and took part in the fighting near Pozieres and later at High Wood where they took heavy casualties. While the 2nd was a regular battalion the majority of men in it by 1916 were wartime volunteers, which again here could explain the ‘KNut’ reference.

Many photos like this we taken in villages close to Albert on the Somme; in houses turned into studios or in back-gardens and even in the street. They show soldiers in an ‘Active Service’ look very different to photographs taken in training.

The 8th Battalion Royal Sussex Regiment was a Pioneer battalion raised in Sussex in 1914. While many Pioneer units were raised in the Midlands and North of England where the male population was often used to hard physical labour and made excellent army Pioneers, those that lived and worked in Britain’s rural communities were found just as suitable. The men who joined this battalion in September 1914 were largely drawn from the rural towns and villages of West Sussex and were older than the average recruit; men in their late 20s and into their 30s. They trained at Colchester and then went to France in July 1915 as Pioneers to the 18th (Eastern) Division.

This photograph was taken in Belgium in the autumn of 1917; it is one of a number I have all with the same farm buildings in the background which were typical of the sort of structures found in the area around Poperinghe. The 8th Royal Sussex spent some time here in 1917 during the Third Battle of Ypres and it appears they invited a local photographer to take pictures of the whole battalion platoon by platoon, judging by the different examples I have. Unfortunately these images were not named, so while we know when and where the photo was taken, and what unit it was, we have no idea who these men were: a frustratingly common problem with Great War images.

This soldier of the Royal Sussex Regiment was photographed in Eastbourne sometime in 1916. He is wearing a style of uniform that became very symbolic of the Great War: Hospital Blues.

A form of hospital uniform had been introduced even before the Boer War but in the early years of the Great War the need to ensure that convalescing soldiers had a uniform they could wear in public became quite important; if they stepped out in civilian clothes there was always the risk they might attract the attention of zealous patriots who went round handing out white feathers to men not in uniform whom they suspected were not doing their ‘bit’ for King and Country.

The Hospital Blues uniform was therefore available for convalescing troops in Britain; some were issued for France, but the emphasis on issue was on the Home Front because of the problems of interaction with the public. It consisted of a white shirt, a bright red woven tie and a blue jacket; all of which can be seen in this image. As is visible here the soldier also wore his Service Dress cap with regimental insignia; where no cap was available, soldiers often wore their regimental badge on their lapel. The uniform was worn with pride as it showed that not only was the man in the armed services, he had served overseas and been wounded.

The fact that this photograph was taken in Eastbourne may also indicate the unknown soldier here may have been a patient in Summerdown Camp; constructed on the high ground above the town, it was one of the largest convalescent hospitals in Sussex during the Great War, and photographs of it will feature in a future posting.